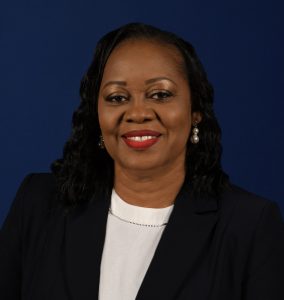 Mrs. Claire Davidson-Williams assumed the position of Permanent Secretary (Acting) at the Ministry of Housing and Urban Development in February 2021, having confidently accepted that responsibility as the Accounting Officer.
A career Public Officer, PS Davidson-Williams joined the Service in 1985 as a Clerk I at the Tobago House of Assembly (THA). She ascended the ranks of the public service and in 2002 decided to switch gears when she got the opportunity to assume the duties of Investigator in the Office of the Ombudsman. One of her major accomplishments, was coordinating the establishment of the first full-time Tobago Regional Office of the Ombudsman. She later went on to be appointed Senior Investigator to the Ombudsman.
She later returned to the THA as Administrator and was responsible for heading several Divisions. In 2018, she served as Chief Administrator and as Permanent Secretary, Central Administrative Services, Office of the Prime Minister in 2019. During 2020 she held the position of Deputy Permanent Secretary (Acting) in the Ministry of Sport and Youth Affairs as well as at the Ministry of Youth Development and National Service, which paved the way for her current position at the Ministry of Housing and Urban Development.
An accomplished educator, PS Davidson-Williams served as Tutor, at the Arthur Lok Jack Graduate School of Business; as well as at the UWI’s Open Campus in Tobago; and as a part-time Lecturer at the Cipriani College of Labour and Co-operatives, in Tobago.
PS Davidson-Williams has a M.Sc. Management (International) and is trained in Action Learning and Mediation, making her adept in achieving her key objective, which is, “to collaborate with organisational stakeholders by providing tools for facilitating strategic thinking, enhancing performance for effective service delivery, the achievement of goals and an improved quality of life”.