75 Families Made Happier as they Receive Certificates of Comfort 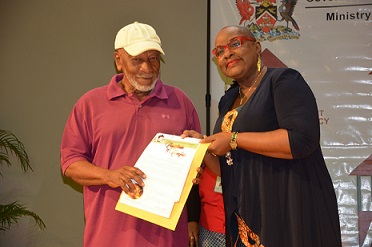 75 Families Made Happier as they Receive Certificates of Comfort

On October 12, 2022, seventy-five (75) recipients located across the length and breadth of Trinidad received Certificates of Comfort during a ceremony hosted by the Land Settlement agency (LSA) at the Government Campus Plaza, Richmond Street, Port of Spain.

Delivering the feature address was the Honourable Camille Robinson-Regis, Minister of Housing and Urban Development. Also attending and bringing remarks were the Honourable Adrian Leonce, Minister in the Ministry of Housing and Urban Development and Mr. Wayne Inniss, Chairman of the Land Settlement Agency.
Minister Robinson-Regis said, “The Land Settlement Agency, or LSA, helps people meet one of their most basic human needs. Through the LSA we make sure our communities know of our compassion, empathy, and service, as a caring Government. Through the LSA we show that here in Trinidad and Tobago, we take care of our own.”

She added that. “It has been a long journey for many of you since the date of your application (on or before October 27, 2000). That is because it is a lengthy, legal process to regularise unplanned settlements on State land. However, I want you to know that we support you every day. Inevitably there will always be delays in the Regularisation process, but I hope everyone here understands that what we are doing here today is huge. We are giving a great benefit to seventy-five (75) more families. I say seventy-five (75) more because we have already prepared approximately eight thousand three hundred (8,300) Certificates of Comfort since the law was enacted.”

Minister Adrian Leonce told the elated recipients, “The Certificate of Comfort you receive today leads to a Statutory Lease, which then leads to a Deed of Lease and in that Deed of Lease, you have the right to discourage further squatting in your community and create that social change.

The granting of a CoC is the first step in the process towards regularization of tenure under the Squatter Regularization Programme by the Land Settlement Agency (LSA) who is governed by the State Land (Regularisation of Tenure) Act No. 25 of 1998 (SLRT Act).

A Certificate of Comfort protects the occupier from being ejected from State Lands that he or she occupies, and is not a Deed and therefore cannot be sold, assigned or transferred to another. A CoC therefore, enables the holder to advance to the next step once they have satisfied all the requirements set out under the State Land (Regularisation of Tenure) Act 25 of 1998. The next stage is the issuance of a Statutory Lease which gives an interest in the land and provides the holder with a maximum of thirty (30) years to settle payment for the occupied lands at twenty-five percent (25%) of the market value. Once the full payment for the occupied lands under the Statutory Lease arrangement is satisfied, a Deed of Lease is awarded, the final step in the regularization process. The assigned Deed of Lease is valid for a period of 199 years and conveys ownership of the land to eligible squatters and all the benefits of land ownership under the Constitution such as land tenure, legitimate home ownership and the creation of generational wealth. Further, in June, 2020 the LSA introduced the Tenancy Programme,
which captured persons after 2000 and before June 2014 to provide security of tenure for certain categories of squatters/occupants of state lands in designated areas cited in the State Land (Regularisation of Tenure) Act 25 of 1998, as well land settlement areas.

Also, in attending the COC distribution were His Worship, Alderman Joel Martinez, Mayor of Port-of-Spain, the Honourable Brian Manning, Minister in the Ministry of Finance and Member of Parliament for San Fernando East, Ms. Vandana Mohit, Member of Parliament for Chaguanas East, Ms. Nirmala Ramlogan, Acting Permanent Secretary, Ministry of Housing and Urban Development, Mr. Hazar Hosein, CEO of the Land Settlement Agency, Ms. Bhanmatie Seecharan, Commissioner of State Lands (Ag.) Ministry of Agriculture, Land and Fisheries and members of the board of directors of the Land Settlement Agency.