Commemoration of 60th Anniversary of Independence 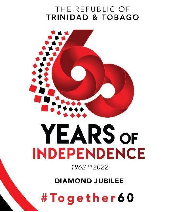 Commemoration of 60th Anniversary of Independence

The 60th Anniversary of Independence – “Diamond Jubilee” is being held under the theme “#together60”.

In revealing the Commemorative Logo, Minister Robinson-Regis explained that the logo was ‘inspired by the dynamism of Trinidad and Tobago’s journey to becoming an Independent nation and the potential, resilience and future focus of our people’.

Further, this Logo is ‘anchored by modernity, this design boldly and beautifully combines both abstract and textured elements to convey an inspiring story of progress, potential and purpose in honour of Trinidad and Tobago’s   60th Anniversary of Independence and the bright future that lies ahead.’

The design seen within the numbers six and zero, represents infinite movement. The 60th Anniversary logo was designed by Graphic Artist Bertrand John of Tobago.

“These concerts are expositions of our cultural manifestations comprising of our indigenous expressions, signposts to our deepest and most sincere aspirations for unity and solidarity as a people. Reminiscent of our National watchwords “Together we aspire, Together we Achieve”, each concert will begin with a smoke ceremony conducted by the First Peoples of Trinidad and Tobago and will include premium artistes from the various cultural aspects synonymous with Trinidad and Tobago such as – Calypso, Soca, Chutney, Parang, Parang Soca, Rhythm Sections, steel Orchestras and soloists.

These celebratory events will provide moments of reflection on what it is to be a Trinbagonian as stepping stones to generating and nurturing National pride.

Several cultural, art exhibitions and other events are carded for the 60th Anniversary Celebrations, these include a Patriotic Song Competition, a Patriotic Essay Competition for school children and other young people to participate.

The Cultural Caravan will cross the entire country and feature nationally acclaimed artistes and artistes from the area.

Whitehall@60 – will feature a graphic display of our Nation’s history using Whitehall as the backdrop. This will be done over three days and the public will also be treated to an easy listening concert by saxophonists, tenors, baritones and choirs and steel pan soloists.

A national Pan concert titled ‘Pan On Higher Note’ will run from August 5th to 7th.

A Multi-media Art exhibition will also be hosted by the Prime Minister at Milles Fleur, Stollmeyer’s Castle and the Archbishop’s House.

In Tobago there will be the lighting up of the Shaw Park Complex and the Buccoo Boardwalk and Tobago will also host its inaugural Independence Dinner along with a series of exhibitions.

A full list of current and upcoming activities is provided in the attached and citizens are invited to participate in the various events as we celebrate our Nation’s 60th Anniversary of Independence.