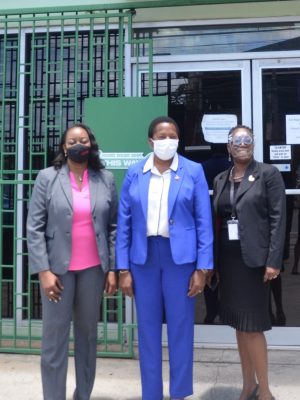 The Honourable Minister and recently appointed Permanent Secretary paid a visit to the East Port of Spain Development Company Limited on April 01, 2021 to meet with staff as part of their familiarization tour of the Agencies under the remit of the Ministry of Housing and Urban Development.

At the end of the tour Minister Beckles and PS Davidson-Williams listened and addressed concerns raised by staff. In her opening comments Dr. Thomas, Managing Director of EPOSDC, said that it was indeed an historic day as it was the first time since its inception, fourteen (14) years ago, that a Minister with responsibility for EPOSDC visited and met with staff.

PS Davidson-Williams thanked Dr. Thomas and her staff for warmly welcoming the Honourable Minister and herself to EPOSDC. The PS said she saw the visit as an opportunity to further strengthen the relationship with EPOSDC and looked forward to greater collaborative work with respect to the many initiatives undertaken throughout the communities of east Port of Spain.

The Honourable Minister also indicated a desire to foster closer relations with EPOSDC. As line Minister she said it is her responsibility to ensure there was equity in the distribution of scarce resources allocated to the Ministry. She also said that her particular leadership style of governance lends itself to being present and accountable to all the entities under her remit. They can also expect to receive equal treatment from her and her office.

During the Question and Answer segment of the session, Minister Beckles told the staff that they must understand the challenges faced in requesting funding for projects, particularly now in light of the economic downturn which has been further exacerbated by the pandemic. Minister told the staff that, “Success breeds success only if the success is known”, so part of her responsibility would be to highlight the good work being carried out by EPOSDC and its impact on the communities served, and the country by extension to her colleagues in and out of Parliament.