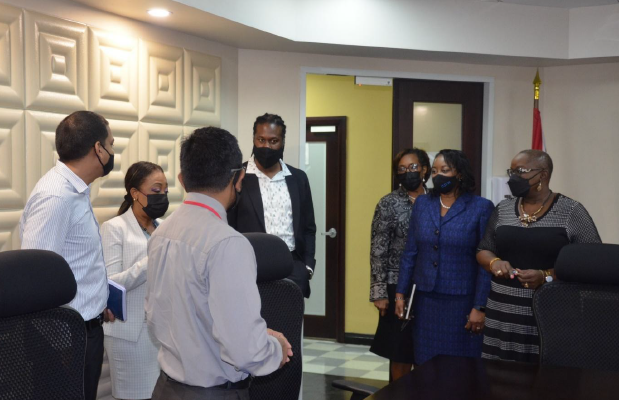 Minister of Housing and Urban Development (MHUD), the Honourable Camille
Robinson-Regis, met with the HDC’s Managing Director, Ms. Jayselle MacFarlane and her Management Team at the HDC’s office at South Quay, Port of Spain on March 28, 2022 as part of her familiarization tour of the Agencies under the remit of her new Ministry.

The Minister’s mantra as she told those present at the meeting is that, “it is important for citizens to view the HDC as working for them, in facilitating their need for shelter, whether it’s a mortgaged unit, rental or rent-to-own. The same applies to structural issues encountered with allocated units. Homeowners and tenants alike must believe that the HDC will act in their best interest to resolve issues in a timely and efficient manner. Further, the public must be made aware of the process involved in the allocation of public housing and the HDC must do its best to alleviate their level of frustration”.

Minister Robinson-Regis met with the HDC Team to get status reports on ongoing projects and
developments, as well as works proposed by the Corporation. Additionally, the Minister sought to get a sense of the operational challenges the Team was encountering in delivery of the HDC’s mandate. MD MacFarlane and her Divisional Managers spoke at length of what they have been doing and will continue to do to improve the efficiencies of the Corporation, so as to better serve their clientele.

The Honourable Minister also highlighted the critical need to keep potential clients updated as to the status of their applications, from the issue of reference numbers to finding out the kind of housing unit for which they may be qualified. The Minister is of the view that once the public understands the process, their level of frustration will be lessened.

The Minister was apprised of projects underway particularly in relation to digital transformation, as the HDC will soon be unveiling electronic fund transfer and the e-tender platforms which will reduce the need for persons to visit the HDC’s offices. The MD advised the Honourable Minister that there are plans afoot to promote the various initiatives with multi-media campaigns, so that existing as well as potential clients, will have a better appreciation of what they can expect going forward.

Minister Robinson-Regis in thanking MD MacFarlane and her team for their warm welcome, asked the Team to ensure that citizens are kept at the forefront of their work, so that the quality of construction was of the highest standards, and the treatment meted out to citizens was of the
highest quality, making interaction with the HDC a positive experience. . Minister promised the Team her support in finding solutions to the issues at hand. In so doing, Minister promised to meet with them again to work on strategies for addressing the financial constraints of the company which have adversely affected timely payments to contractors, the quality and cost of construction and the way forward in treating with contractors whose work sometimes require costly remedial intervention.