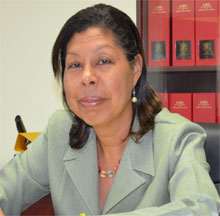 Throughout her professional career, Ms. Thorne-Mora has held the positions of Director, Research and Project Management Unit, Senior Research Officer, Senior Project Analyst, Summit Support Specialist, Research Officer I, Geography Teacher and Clerk I at various Ministries namely, Consumer Affairs, Legal Affairs, Finance and Planning and Development. These appointments have allowed her to gain a considerable amount of institutional knowledge and experience over the years in research, planning and project management.

Ms. Thorne-Mora Quinones is a graduate of the Henley Management College/Brunel University, the University of the West Indies and the George Washington University, where she would have received extensive training in Management, Public Administration, Event Management, Project Management and Spanish.

Having previously been assigned to the Housing Ministry during the period 2003 – 2007 as an Operational Research Officer III and then as Director, Economic Research and Planning Unit, she was delighted to return and serve in this new capacity.

The Ministry’s staff believe that her training, knowledge and experience will certainly be beneficial in managing this Ministry which is key to Government’s plan to revitalize the economy.